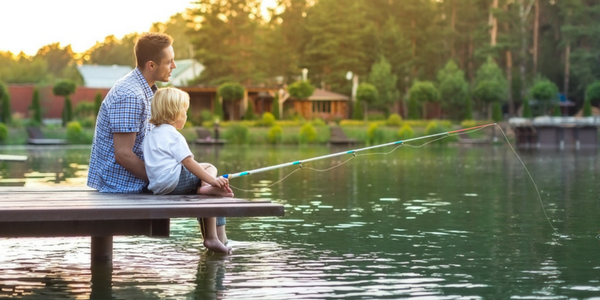 What do you want for Mother’s Day? Yes, I know that holiday has already passed and Father’s Day is around the corner, but humor me for a moment. Was it a night alone with a good book and a glass of wine? Maybe some pampering with a massage and dinner cooked AND cleaned by someone other than yourself? Well, dads aren’t much different. Even though these holidays are meant to celebrate the fact that we have lovingly brought children into this world and are raising them, what we often want is a small, but needed, break from our offspring on that special day. We all want some pampering, some time spent doing something just for us, and a bit of appreciation.

STEP ONE: Think about what he likes to do in his free time.

Does Dad golf, watch TV or play video games? Would he like to go to a baseball game but his weekends are often filled with family obligations? Does he love a particular TV show, but he can never watch it because it isn’t “family-friendly”? How did he enjoy spending his weekends or time away from work BEFORE you had kids … maybe even before you got married? Does he still enjoy those same things but never has time for them?

STEP TWO: Find a way to make step one happen.

Arrange for him to spend time on Father’s Day doing exactly what HE wants to do. Buy him a full season (or even series) of his favorite show and allow him to binge watch without interruption. Buy two baseball tickets for that day and allow him to take whomever he wants. Get the violent video game he has been dying to play and take the kids out so he can play it without fear of little eyes peaking in. Whatever will make his day exactly the way he wants it, make that happen. And then take a deep breath and promise yourself that you won’t ask him to do anything for you on that one day.

STEP THREE: Let the kids still give him a gift of their choosing.

Those little presents are still priceless for Dad. A one-of-a-kind paper weight, a poem that they wrote, a framed picture, a mud pie or even another tie. Ask the kids what they want to do for Dad, and help them make it or do it. They want to show him how much they love him, and they are the reason for this special day, after all!

Vicki Little is a preschool teacher with two children. A Colorado native, she spends her time writing, sitting in the bleachers for her daughter’s gymnastics, and engaging in spirited debates with her son. In her free time…well, she is still waiting for some of that.