20 Chapter Books To Read With Your Kids This Summer 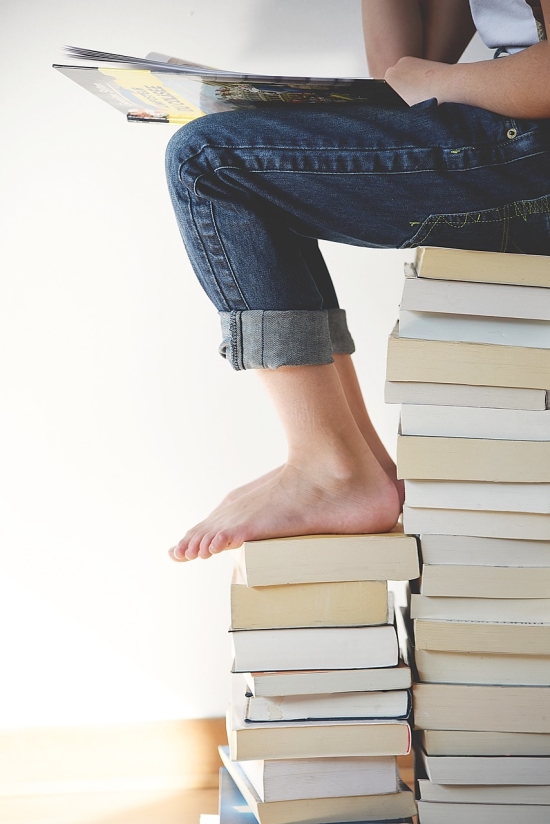 No more pencils maybe, but the old singsong about “no more books” should be far from the truth if you are trying to raise a reader and avoid the dreaded summer slide. The best part of summer is you can read any book you want without having to do a book report! A great way to make family memories is to cuddle up on the sofa and explore new chapter books together.

1.  The Last of the Really Great WhangDoodles, by Julie Andrews Edwards

The Whangdoodle was once the wisest, kindest, and most extraordinary creature in the world. Then he disappeared and created a wonderful land for himself and all the other remarkable animals — the 10-legged Sidewinders, the little furry Flukes, the friendly Whiffle Bird, and the treacherous, “oily” Prock. It was an almost perfect place where the last of the really great Whangdoodles could rule his kingdom with “peace, love and a sense of fun”— apart from and forgotten by people.

August Pullman was born with a facial difference that, up until now, has prevented him from going to a mainstream school. Starting 5th grade at Beecher Prep, he wants nothing more than to be treated as an ordinary kid — but his new classmates can’t get past Auggie’s extraordinary face.

Something strange is happening at the Clarksville City Zoo. One day, Megan disappears, and her brother and their friends realize it’s up to them to find her. Their only choice is to follow a series of clues and sneak into the zoo. But once inside, they discover there’s much more to the Clarksville City Zoo than they ever could have guessed…

Stanley Yelnats is under a curse. A curse that began with his no-good-dirty-rotten-pig-stealing-great-great-grandfather and has since followed generations of Yelnatses. Now Stanley has been unjustly sent to a boys’ detention center, Camp Green Lake, where the boys build character by spending all day, every day digging holes exactly 5-feet wide and 5-feet deep. There is no lake at Camp Green Lake. But there are an awful lot of holes.

When Marty Preston comes across a young beagle in the hills behind his home, it’s love at first sight — and also big trouble. It turns out the dog, which Marty names Shiloh, belongs to Judd Travers, who drinks too much and has a gun — and abuses his dogs. So when Shiloh runs away from Judd to Marty, Marty just has to hide him and protect him from Judd. But Marty’s secret becomes too big for him to keep to himself, and it exposes his entire family to Judd’s anger. How far will Marty have to go to make Shiloh his?

When Thaddeus Blinn came to Coven Tree, he was just a funny little man who drifted into town with a strange tale about being able to give people whatever they wished — for only 50 cents. There was nothing scary about him. At least, not until the wishing began…

7, A Series of Unfortunate Events Series, by Lemony Snicket

Follow the lives of Violet, Klaus, and Sunny Baudelaire after their parents’ death in a fire. The children are placed in the custody of a murderous relative, Count Olaf, who attempts to steal their inheritance and, later, orchestrates numerous disasters with the help of his accomplices as the children attempt to flee. As the plot progresses, the Baudelaires gradually confront further mysteries surrounding their family and deep conspiracies involving a secret society.

9. The Invention of Hugo Cabret, by Brian Selznick

Orphan, clock keeper, and thief, Hugo lives in the walls of a busy Paris train station, where his survival depends on secrets and anonymity. But when his world suddenly interlocks with an eccentric, bookish girl and a bitter old man who runs a toy booth in the station, Hugo’s undercover life — and his most precious secret — are put in jeopardy.

Is Nick Allen a troublemaker? He really just likes to liven things up at school — and he’s always had plenty of great ideas. When Nick learns some interesting information about how words are created, suddenly he’s got the inspiration for his best plan ever… the frindle. Who says a pen has to be called a pen? Why not call it a frindle? Things begin innocently enough as Nick gets his friends to use the new word. Then other people in town start saying frindle. Soon the school is in an uproar, and Nick has become a local hero.

Together they share adventures that find them searching for hidden buttons while dusting Mama’s front parlor and visiting with the peddlers in Papa’s shop on rainy days. The girls enjoy doing everything together, especially when it involves holidays and surprises. But no one could have prepared them for the biggest surprise of all!

12. The Wind in the Willows, by Kenneth Graham

When Mole goes boating with Ratty instead of doing his spring cleaning, he discovers a whole new world. There are adventures on the river and in the Wild Wood, as well as high jinks on the open road with that reckless ruffian, Mr. Toad of Toad Hall. Ratty, Mole, Badger and Toad become the firmest of friends, but after Toad’s latest escapade, can they join together and beat the wretched weasels once and for all?

13. The Adventures of the Wishing Chair, by Enid Blyton

When Mollie and Peter go to buy their mother a birthday present, they discover the most extraordinary thing: a chair that can fly and grant wishes! The Wishing Chair takes them on some marvellous adventures — to a castle where they narrowly escape from a giant and rescue Chinky the pixie, to the Land of Dreams, and to a disappearing island!

14. My Side of the Mountain Trilogy, by Jean Craighead George

Terribly unhappy in his family’s crowded New York City apartment, Sam Gribley runs away to the solitude — and danger — of the mountains, where he finds a side of himself he never knew existed.

Welcome to Centerburg!  Where you can win 100 dollars by eating all the doughnuts you want; where houses are built in a day; and where a boy named Homer Price can foil four slick bandits using nothing but his wits and pet skunk.

16. Island of the Blue Dolphins, by Scott O’Dell

This is the story of Karana, the Indian girl who lived alone for years on the Island of the Blue Dolphins. Year after year, she watched one season pass into another and waited for a ship to take her away. But while she waited, she kept herself alive by building shelter, making weapons, finding food, and fighting her enemies, the wild dogs.

Eli has never left Serenity … why would he ever want to? Then one day, he bikes to the edge of the city limits and something so crazy and unexpected happens, it changes everything. Eli convinces his friends to help him investigate further, and soon it becomes clear that nothing is as it seems in Serenity. The clues mount to reveal a shocking discovery, connecting their ideal crime-free community to some of the greatest criminal masterminds ever known. The kids realize they can trust no one — least of all their own parents.

This is the poignant tale of a lonely little girl, orphaned and sent to a Yorkshire mansion at the edge of a vast lonely moor. At first, she is frightened by this gloomy place. Later, with the help of a local boy Dickon (who earns the trust of the moor’s wild animals with his honesty and love), the invalid Colin (a spoiled, unhappy boy terrified of life), and a mysterious, abandoned garden, Mary is overcome by the mystery of life itself — its birth and renewal, its love and joy.

19. Number the Stars, by Lois Lowry

Through the eyes of 10-year-old Annemarie, we watch as the Danish Resistance smuggles almost the entire Jewish population of Denmark, nearly 7,000 people, across the sea to Sweden. The heroism of an entire nation reminds us that there was pride and human decency in the world, even during a time of terror and war.

Matilda is a sweet, exceptional young girl, but her parents think she’s just a nuisance. She expects school to be different, but there she has to face Miss Trunchbull, a kid-hating terror of a headmistress. When Matilda is attacked by the Trunchbull, she suddenly discovers she has a remarkable power with which to fight back. It’ll take a superhuman genius to give Miss Trunchbull what she deserves and Matilda may be just the one to do it!

Someone’s been stealing from the three meanest farmers around, and they know the identity of the thief — it’s Fantastic Mr. Fox! Working alone, they could never catch him; but now fat Boggis, squat Bunce, and skinny Bean have joined forces, and they have Mr. Fox and his family surrounded. What they don’t know is that they’re not dealing with just any fox — Mr. Fox would rather die than surrender. Only the most fantastic plan can save him now.

The BFG is no ordinary bone-crunching giant. He is far too nice and jumbly. It’s lucky for Sophie that he is. Had she been carried off in the middle of the night by the Bloodbottler, or any of the other giants — rather than the BFG — she would have soon become breakfast. When Sophie hears that the giants are flush-bunking off to England to swollomp a few nice little chiddlers, she decides she must stop them once and for all. And the BFG is going to help her!

Mr. and Mrs. Twit are the smelliest, nastiest, ugliest people in the world. They hate everything — except playing mean jokes on each other, catching innocent birds to put in their Bird Pies, and making their caged monkeys, the Muggle-Wumps, stand on their heads all day. But the Muggle-Wumps have had enough. They don’t just want out, they want revenge.

After James Henry Trotter’s parents are tragically eaten by a rhinoceros, he goes to live with his two horrible aunts, Spiker and Sponge. Life there is no fun, until James accidentally drops some magic crystals by the old peach tree and strange things start to happen. The peach at the top of the tree begins to grow, and before long, it’s as big as a house. Inside, James meets a bunch of oversized friends — Grasshopper, Centipede, Ladybug, and more. With a snip of the stem, the peach starts rolling away, and the great adventure begins!

Willy Wonka’s famous chocolate factory is opening at last! But only five lucky children will be allowed inside. And the winners are: Augustus Gloop, an enormously fat boy whose hobby is eating; Veruca Salt, a spoiled-rotten brat whose parents are wrapped around her little finger; Violet Beauregarde, a dim-witted gum-chewer with the fastest jaws around; Mike Teavee, a toy pistol-toting gangster-in-training who is obsessed with television; and Charlie Bucket, Our Hero, a boy who is honest and kind, brave and true, and good and ready for the wildest time of his life!

Vicki Little is a work-at-home mom with two children. A Colorado native, she spends her time writing, sitting in the bleachers for her daughter’s gymnastics, and engaging in spirited debates with her son. In her free time…well, she is still waiting for some of that.