Featured Dad Post: There’s Nothing Under Your Bed. Except Me. 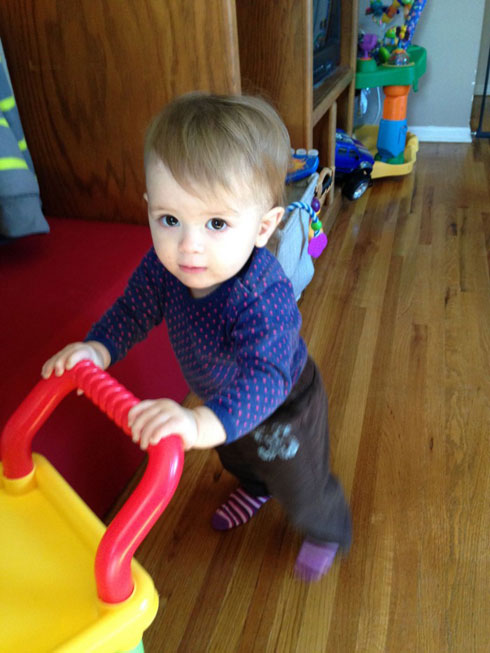 I’m lying under my daughter’s crib smiling at a life that’s culminating with me hiding from my one-year-old. I had been there for 15 minutes, waiting for her to finally succumb to a big, fat Saturday of toddling and wheezing. I had just put her down, slumbering, but then, like a creepy doll, her eyes pop open. That’s when I hit the floor. She’s got a bad cold and going horizontal stuffs her up, and then she gets crazy. If she sees me, then it’s game on. I can’t ignore this child. Sarah is a firmer parent in her interactions, but me… my daughter takes me out with her baby ballistics. I don’t stand a chance, so I’m hiding.

She’s up there talking and being so damn cute. She’s dropping her “da-da-da” with an occasional “dad, ” and I wanna launch and surprise her with the biggest baby hug ever. She squeaks a few times and then pauses. She’s waiting for a reaction. Waiting for someone to come running in and return the favor. Someone to reaffirm that what she’s doing is right. I think of her future and how this will somehow mess her up. She’ll drop out of school because no one ever validated her that winter night in 2015. She’ll have trust issues and withdraw from society. Cats all over the damn place.

There have been times when I’m pretty certain my 20-year-old me would be very disappointed in the current model. I can’t drink beer anymore as my giant bald head turns into a burning bulb of allergic malfeasance. I often can’t stay awake through Bronco games (c’mon 5 field goals?), and the biggest part of my week is taking my boys out for hot chocolate every Wednesday. What happened to radio in New York City… or cocaine strippers, or a black belt in night-life asskickery?

I bet, though, once I’m able to get the younger me over the shock, I could show off these kids of mine and tell him that these are the coolest humans you’ll ever meet. And guess what? They actually like spending time with you. Remember all that hassle conjuring kegs at age 19 just so the pretty people would descend from on high and hang out with you? Dude, you’ve made it. One day this kid, Otto, will take your hand and tell you he wants to be you. Not be like you, but BE you. And you’ll have to do your best not to reel backwards and scold him. And this other boy, Quin, is the smallest 2nd-grader you’ll ever meet, but he’s at the ready to play football any moment. Sure, right now you’re lying under a crib hoping not to be discovered by a 14-pound infant, but of all the people on the planet — the cool kids, the rich kids, the magicians and Kobe Bryants and Louis CKs, the presidents and debutantes, the billionaires, the break dancers — it’s you she’s hoping to see.

Plus, you have three kids, so that means you’ve already been laid several more times than most of the ’90s.

That’ll get him. He’ll be stoked. Especially since it’s with that hottie he spotted at Taco Bell in 1994. I think what I’ll avoid telling him is that — among other things — his second-grader’s homework is already too confusing for him and that his 5-year-old can see through his flesh and examine his soul. I won’t mention some stuff about the little girl. Like that she’s an emotional terrorist. Those boys are his best buds, and he can throw them in the car like a sack of soccer balls and go off to the park for hours. This girl, however, is hanging off a heart string.

Of course he probably won’t want to hear that on several occasions, I drank out of a sippy cup on the way to work. Or that one of the biggest victories isn’t on the gridiron, but getting my daughter to daycare before she has her morning poop. And he definitely wouldn’t care to hear that there’s a grown woman in the house drinking wine by herself as I army crawl out of my baby’s bedroom.

I’m hiding under a bed on a Saturday night.

Strategies For Your Road Trip: Getting There Without Getting Off Track How To Teach Your Kids Life Skills That Will Stick