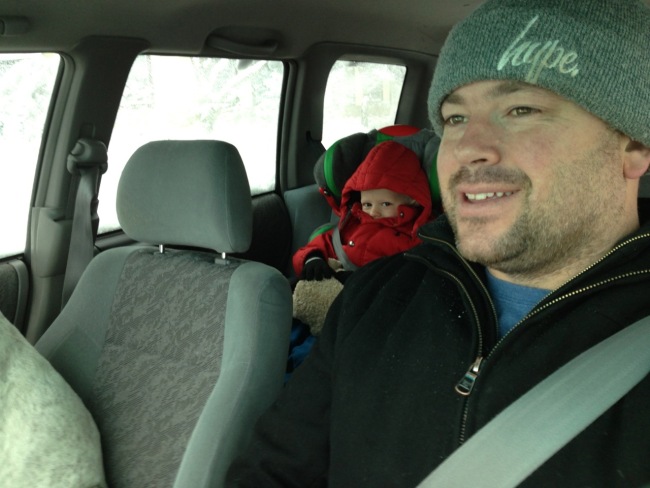 “When I fart, it’s like a little dinosaur rawr. When Dad farts, it’s like RAWWWWR.” — Quin, age 3

The other day we pulled up to the house and I did my Sherpa duties of emptying the car and tracking down the children. When we got inside, I settled into some surfing before realizing I had no idea where Otto was. I asked Quin and he shrugged. I started to panic a little bit because my imagination is horrible. Had I left him alone to suffer on some street corner? Is he still at Target? Did I leave him on the roof like I did the bagels and then later the boys’ hot chocolates? Why in hell would I have put him on the roof of the car? All of these questions pounded my conscience as I burst out of the house and ran towards our 1998 Subaru Forester. Muttering to myself about being an idiot, I orbited the outside of the boxy wagon to find my middle child perched in the doorway of the car. He wasn’t entirely in and he wasn’t entirely out. He leaned against the open door as if he were about to make a parachute jump.

One little thing about our Subaru Forester: To our boys it’s better known as the black car, yet to me, it’s affectionately titled “The Poop Car.” You see, the Forester is the one place where the boys can use potty talk. In the “poop car” they can flex their foulness and giggle like demented comic book villains over flatulence, diapers and other excretory appreciations. It was our last-ditch effort to curb their emissions, and we think it’s worked.

The impetus for the “poop car” came when, like a time-lapse flower, our boys blossomed from mostly innocent vessels of adorability to biological waste-dumps. It happened fast, and our parental ordinance was but a baby sneeze amid their fecal mushroom cloud.

We offered all of our gentle admonishment, as well as finger-snapping, distractions and occasional all-out shut-your-mouth shouting. But it seemed like, aside from going Adrian Peterson on our beloved boys, we needed to conjure something creative.

So we compromised. We offered them a place to get it all out, and sometimes that means we get a quiet reprieve as they go out and sit in a parked car. A small refuge for the literal shit-talkers in our life.

That’s where I found Otto. He set silently on the edge of the car’s exit, gazing up, down and around like he was trying to remember what he’d forgotten. And then it came to him — just the right youthful expletive before giving up his raunch rights for dook-talk downtime. “Poopy!” he shouted, before jumping to the ground and running inside. I was left to close the door on the “poop car, ” but happy to leave their inanities outside in the driveway.