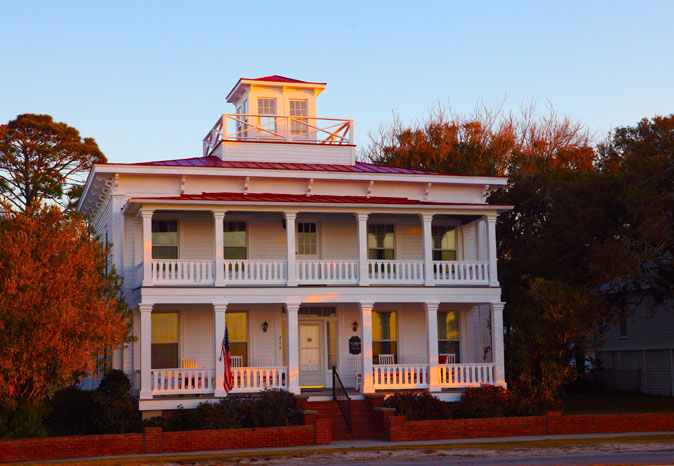 After picking up my mother at the Raleigh airport, we headed due southeast about three hours to the coastal town aptly named Southport. While its sister town Wilmington gets lots of attention, it’s the more quiet and water-rich nature of this town that caught our attention. With a population of roughly 3, 000 people year-round, its fishing piers, boats and estuaries can be seen without interruption as the town lies near the mouth of the Cape Fear River.

Our first stop in town was Fishy Fishy Café, a guest and local favorite, for good reason. I ordered fish and chips without even opening the menu. We dove right in to the local delicacies, including my mom’s crab cake sandwich, and quizzed the waitress on local myths and truths—something somewhere in between—and attractions. From our view at lunch, we could see Oak Island, home to the largest beach town population in North Carolina and host to hundreds of summer rentals,  but you’re not going to find that in Southport.

After lunch we walked Howe and Moore Streets, peaked in local galleries and picked up some antique silver charms for our collections in the dozen or so vintage,  heritage and heirloom stores in town.

Our Inn, the Robert Ruark Inn, was one of only of five inns or hotels in town. Co-owners Rick and Linda Pukenas put on a spectacular Southern show. Because it was a bit too cold to ride the Inn’s bikes around town, we signed up for Rick’s electric cart tour (free to any of his guests), which attendees will learn should be called the “Lord Howe Dry I’m.” We loaded up with blankets and headed out on that cool December afternoon. We passed the Old Smithville Burying Ground, Fort Johnston (home of the Southport Museum & Visitors Center) and the North Carolina Maritime Museum, where you can see the Cape Fear River Inlet through a 33-foot periscope.

Dinner was followed at Ports of Call, known for seafood specialties from around the world. Films adapted from acclaimed author Nicholas Sparks are often filmed in and around this restaurant’s neighborhood, and all over Brunswick County in general. We chatted with locals about their small, yet mighty town. It was their season, and they were happy to share the glory.

Southport’s most famous residents might be on Sunset Beach, where 260 species of birds frequent the area. Oodles of types of seashells can be found along the white sand beaches in the county. The longest continuous 4th of July celebration in the state is held in Southport, as well as the Oyster Festival on Ocean Aisle Beach. Nearby Bald Head Island has the oldest lighthouse in the state. Local fish shacks such as Yacht Basin Eatery and Yacht Basin Provision Company “Provisions” are available where you just pick your grill or krill for dinner. 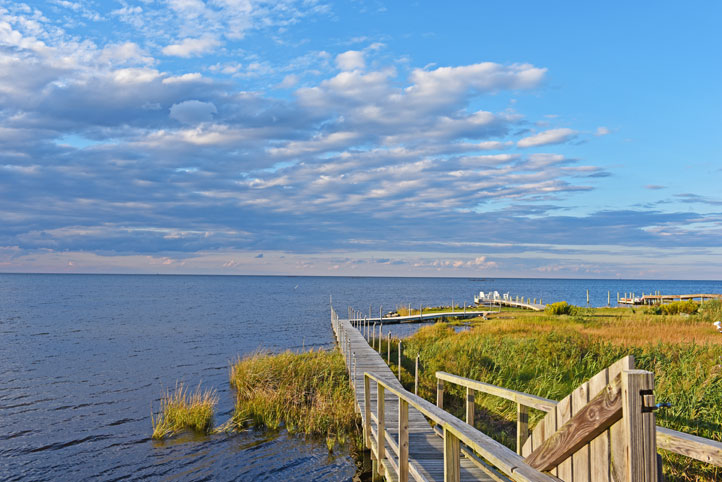 Day Trip to Washington: “The Heart of the Inner Banks”

Three hours and nearly 150 miles of barely any straight passages for more than four miles at a time from Wilmington, my mother and I found ourselves in the tiny inner coastal town of Washington, but referred to as Little Washington for obvious reasons. However, it wasn’t before we passed countless lush, green farms of cotton,  tobacco, soybean, peanut, wheat and corn. We reminisced about our own passion for agriculture and family history in which our cotton plantations led to the rise of family department stores and other industries.

We chose the journey to Washington for one reason: to explore the history of estuaries in our culture. With barely 10, 000 residents, this county seat of Beaufort County is located on the northern banks of the Pamlico River, which empties into the Pamlico Sound and eventually the Atlantic. Named after our first president, the 1776-established town is petite and lined with antique shops and one especially stunning restaurant, The Bank, located in an old bank, “It was one of my most memorable evenings of the year. The vintage architecture and natural materials were stunning. The menu was simple and sophisticated. Julie and I split everything and were impressed to see the restaurant at full capacity on a Wednesday night in early December, ” remarks my mom, Jane Scheff.

Wherever your choice of bed, it will be turn-of-the-century authentic. Ours was at Pamlico House Bed & Breakfast hosted by the lovely VirginiaFinnerty, Owner & Innkeeper, who has a true passion for the region. Stop by and chat her up over a cup of Joe before heading out for the day. As a journalist with a retired 6th grade teacher in tow, my mother and I found her recommendation of the North Carolina Estuarium to be packed with the most darling exhibits, especially the “The Food Chain, ” which is simply captivating, and a wonderful, tangible lesson on the importance of this ecological system.

This is what draws people to the town. Most people stop here for a night in passing and are captivated by the water. Washington was a key port during the War for Independence, and its history and waters are very intriguing.

Julie Bielenberg is a Denver-based writer. She contributes over 50 stories per year to various outlets including: AAA, Cowboys & Indians, Colorado Homes & Lifestyles, Denver Life, Mountain Magazine, Mile High Mamas, Colorado Meetings + Events, Mountain Meetings + Events, and many more. She is the State’s number one agro-tourism writer, covering more ground and events and publishing in more outlets than any other Coloradoan. She travels in search of fields, farms, families and more. Sometimes . . . she finds herself in often uncovered, or understated locales.

South Carolina: Beaufort and Pawleys Island This Pediatrician Will Teach You How To Easily Calm A Crying Baby

Aloha! Mahalo. Komo mai e ai. Greetings! Thank you. Come in and eat. These 3 basic Hawaiian expressions can get you very far on the islands of this beautiful and other worldly place. But what’s the best way to travel, where to go, what to do, and what to pack? I’ll help you with my […]