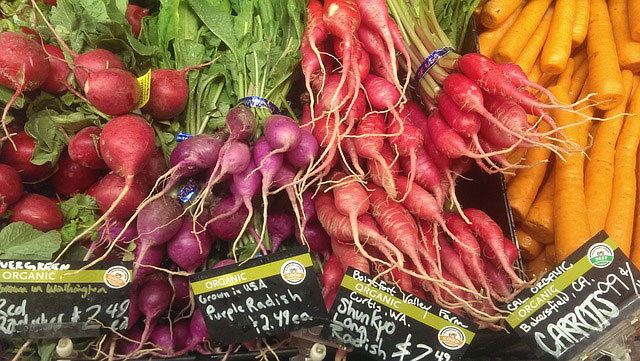 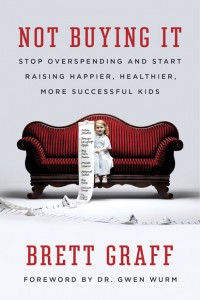 by Brett Graff. Available from Seal Press, a member of The Perseus Books Group. Copyright © 2016.

Clean eating and chemical-free sleeping are worthy goals for our families. The warnings are undeniable: Pesticides sprayed on fruit will alter hormone production and can cause cancer. That’s a miniature discussion of the issue. But you don’t need much more to explain why we – as parents — will spend almost any amount of money on almost any product that we believe will safeguard our families. And that’s in part why today the organic industry is worth some $35 billion a year.

When we buy produce from farmers markets and local shops, we can ask the growers questions about pesticides and production. But once we’re in the supermarket, we’re left interpreting labels ourselves. Here’s a translation of what you’ll read when out grocery shopping.

1) Natural: The word NATURAL means “caused by nature, ” unless it happens to be stamped on a cereal box, ketchup bottle or a personal care product, in which case it means absolutely nothing. There are no rules for using the word NATURAL unless you’re talking about meat, poultry and egg products. Those – if someone’s going to call them “natural” — have to be minimally processed and contain no artificial ingredients. If you don’t spend too much time wondering about the definition of “minimally” or “artificial” (seeing the word “natural” has no standards) you can concentrate instead on comparing the quality and prices for the things you buy, rather than relying on empty promises in the name.

2) Organic: Most doctors and many consumer groups will tell us that money spent on organic food is well spent. But a peek behind the scenes at regulations and testing proves that there’s also a range of pesticide, and even antibiotic residue, found in products within the organic section.

To wear the USDA Organic label, food must meet strict criteria. Processed food must be 95 percent organic, and if the baker wants to tout even one organic ingredient, the other 70 percent of the package — at least — has to be organic, too. Crops must be grown on land that’s been free for more than three years of synthetic substances to wear the label. But that doesn’t mean your produce will be entirely free of synthetic pesticides. That’s because the EPA allows for accidents. The government is very well aware that organic and conventional farms share land. So, if testing finds some synthetic chemicals on organics, but at levels of less than 5 percent of what the EPA’s says is safe, well, that doesn’t really count, does it? Just like how broken cookies have no calories.

A recent pilot study from the USDA in attempt to determine the testing requirements looked at 327 samples of organic apples, strawberries, potatoes, bell peppers and broccoli. A bit more than half of that organic produce — 57.3 percent — had no detectable levels of synthetic pesticides. But the rest — 42.7 percent — did have some synthetic residue. Of that bunch, 21 percent had levels greater than the EPA tolerance levels and were in violation of the organic regulations.

What’s more, organic produce is not produced without pesticides — it’s produced without synthetic pesticides. That sounds perfectly reasonable until you meet Jeff Gillman, a horticulturist who authored five books, including “The Truth About Organic Farming.” Gillman assures us that natural poison can be perfectly toxic to humans, pointing to snake venom as a good example of a substance that even we amateur naturalists would agree isn’t manmade, but certainly not welcome into our bloodstreams.

Researchers from Cornell University, who reviewed organic practices, say all organic produce is not farmed equally. When it comes to the amount of pesticide and antibiotic residue in produce, there is a huge variation in crops across organic farms. The difference between the high-end and the low-end is about as large as the difference between the conventional and organic systems. That’s true too for conventional farms.

This isn’t to discourage us from buying organic fruits and vegetables. It’s merely to prevent any of us from experiencing severe panic at the thought of buying and consuming non-organic produce.

3) Organic or sustainable fish: These designations are titles your supermarket’s fishing crew assigned to its own products, with its own conviction. There are no federal regulations that make fish or shellfish sustainable or organic. There are no tests for toxicity. There are no standards to follow. There are, however, higher prices.

4) Non-GMO: GMOs (genetically modified organisms) are crops that have been manipulated by scientists, who alter the genes so the plants can better resist disease or tolerate pesticides. There are only eight crops in the US with a GMO version: soybeans, corn, papaya, canola, cotton, alfalfa, sugar beets and summer squash. Organic foods cannot contain GMOs. But foods stamped as “Non-GMO” are not automatically organic.

In fact products stamped non-GMO are often produced with herbicides and pesticides. They may come from an operation that confines its animals. And sometimes, products wearing this stamp wouldn’t typically be made with a GMO crop, anyway. It could be more difficult to make organic coconut nectar with soybeans or papaya than it is to keep it free of genetically modified organisms.

5) Fair Trade: When it comes to buying food labeled “Fair Trade, ” you should expect that at least one product ingredient was produced in a factory or farm practicing workplace safety, paying reasonable wages and prohibitive of child labor. When you consider the widespread reports of slavery on cocoa bean farming or reckless use of knives in slaughter houses, Fair Trade practices are worthy of our financial support.

Fair Trade USA (fairtradeusa.org) is the organization affiliated with the USDA, but because there are several authoritative organizations willing to issue Fair Trade labels, it could be difficult to know exactly how much of a product has been manufactured under the conditions you’re hoping to support. For example, you may read ice cream is made with Fair Trade chocolate chips or Fair Trade vanilla. But often, farms responsible for milk production for the ice cream – even right here in the United States – can have unsafe working conditions.

Because violators of those laws are rife in some notable industries — coffee, cocoa, chocolate, tea and bananas, to name a few — the Fair Trade label applying to a small portion of a product can in some cases be very meaningful. But the goal should be for all companies in all countries to create and uphold safe, legal, and suitable working conditions. Not for us to feel good supporting these goals in some factories while — at the same time — turning a blind eye to others.

Let’s Stop Teaching Girls To Be Perfect, Let’s Teach Them This Instead What Your Kids Are REALLY Doing During School Lunch