A Guide To Sibling Rivalry For Exhausted Parents 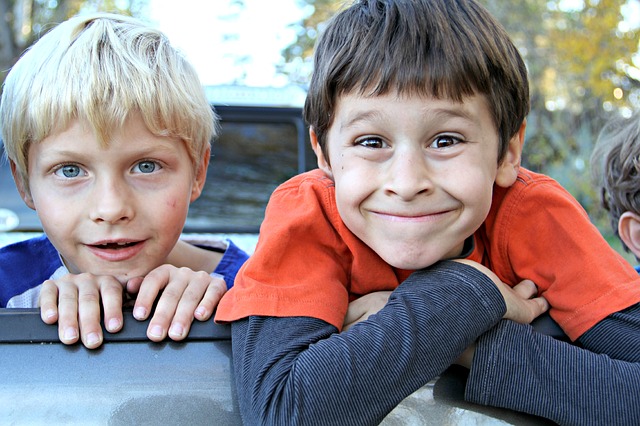 If there is one thing I have found to be true with my kids it is this: They want the exact opposite of what I want. In any given situation. For example, if I find a super-cute pair of shoes during back-to-school shopping, I don’t say a word. Because the second I say that I like them, the kids will say they hate them. The same thing happens during family activities. The one time I actually wanted to stay at the pool and swim longer, they were suddenly tired and wanted to go home. Heck, I have even found this reverse psychology applies to sibling fighting. If I praise them for getting along, suddenly they don’t. But the second I get mad at both of them at once? Suddenly, they are best friends.

I have never written a parenting book (though I have read a bazillion of them), nor have I conducted a research study. But I do have a degree in being a mom. Which means I have enough experience with fights, the “it’s not fair” game, and jealousy to know what works (and what does NOT work) when trying to squash fighting. There isn’t a magic formula that stops children from arguing (who wouldn’t love that?!), but there are things you can do to lessen the intensity of arguments and teach your children how to work things out for themselves.

Don’t contribute to the rivalry. It is easy to accidentally compare your children without realizing it. Talking on the phone with grandma about how well one does in school, or how the other won a ribbon in athletics is perfectly natural — and, in fact, your children should see it as praise for their individual accomplishments. But actually comparing them to one another, like saying, “why can’t you get good grades like your sister?” only increases the rivalry. In addition, taking sides during an argument will not only make the current argument worse, but it will lead to additional ones, too. All you end up with is a hurt child who will, in turn, act out even more.

Do not counter yelling with more yelling. This is SO hard sometimes! When your kids are screaming at each other, you want to stop it at all costs — and your voice is louder than all of them put together when you are mad! But this will only frustrate your kids even more and one will get upset with the other for “getting them into trouble.” Plus, it is hard to ask someone to stop yelling when you are yelling yourself. Lead by example — including when you are arguing with your own sibling or spouse as well!

Help them to find self-management techniques. People need different things to feel like they are calm and in control of their emotions after an argument. Help your kids find what they need to calm down after a situation arises, whether it be time alone, or to just move on, or a cuddle from mom. Some kids may need to lay down, others may take a shower, and some may just want to scream into a pillow. Allow whatever works for them. What should be off limits is continuing to talk about the situation: That will only flare up the argument again. The key is to find these techniques before the next fight breaks out, not in the middle of it.

Diffuse the situation. Most likely, your children aren’t going to suddenly stop fighting and say, “Hey! Instead of fighting, let’s try to work this out!” They are going to need some help taking that first step from arguing to problem-solving. Rather than hollering, “you two better cut it out right now, ” you can calmly (bite your tongue and hold your breath) walk into the room and quietly tell them that you need them to stop arguing and work it out. If the situation is bad enough, have them walk away from each other for a few minutes and calm down. Don’t let them try to tell you their side. Don’t let them get the last word in. Just get them separated. This may take some communication ahead of time in terms of what you expect and what the consequences will be if they choose to ignore your advice.

Let them work it out. Sometimes just having you get involved will be enough to squash the petty fights. And most often, they will work out a compromise that they will stick to, or they will grudgingly admit that it wasn’t a big deal and they will drop it. The first few times it would be best if you helped them in this progress. Don’t speak for them, but simply guide them into telling each other how and why they feel the way they do and what their suggestions are for a compromise.

Have a “B” plan. This one is a bit tricky. When our children do come up with a compromise, we want to leave it in place. Even if we think it is absolutely ridiculous that they each get to watch three minutes of their show, then the other one switches to their show for three minutes and so forth, it is their solution. They worked it out and you should allow it. If they do not come up with a compromise, or if they continue to fight, then it may be time to go to plan B. That means everyone walks away unhappy because everyone loses. (You want to make it so they don’t want to get here again.) This is a good time as well to make the punishment something that benefits the other person. Clean each other’s rooms, write 15 things they like about the other person, write how they could have handled the problem differently, or even how the other person sees what happened. But whatever causes the conflict is done: no screen, no snack, no whatever.

Be realistic. Listen, I am all about my kids working things out themselves, but if one of them hits the other one, or if the other one is waging psychological warfare on the other, I am going to intervene. There will be adult-given consequences. But that is for the bigger stuff, not for fights over what TV show to watch. Your boss doesn’t stick his or her nose in all of your personal issues with another co-worker (I hope), but if there is something big, they will get involved. Same thing here. And believe me, you don’t want your kid to be the one to run to the boss when their stapler gets stolen because they don’t know how to handle it themselves.

Vicki Little is a work-at-home mom with two young kids. A Colorado native, she is the Publisher and Editor of Macaroni Kid Aurora and Downtown Denver. In her free time, she enjoys volunteering, reading, camping, or enjoying a bottle of wine with friends.